Created in the early to mid-90s by writer Sascha Falquet (who also contributed tracks to Behemoth’s ‘Sventevith’ album) Skogen was one of the most memorable zines released during black metal’s golden years. Thoughtful and often lengthy interviews capture many of the most important bands in the underground metal scene during an era when the scene was exploding in dramatic fashion, something reflected in the often extreme worldviews of the participants.

A huge hardback tome with over 200 large format (A4) pages, this anthology combines all three issues in full, along with an interview with the zine’s creator. Includes early conversations with: 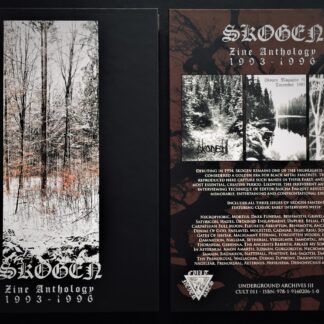