Delivery time: This is a pre-order. This one and all other items you'll order now will not be shipped before September 31st 2022!

Nidaros: Medieval name for the city and municipality now known as Trondheim. Nidaros was the capital of Norway from 997 AD until 1217 AD.

Home to early Norwegian black metal bands such as Thorns and Manes (as well as the cathedral that famously appears on the cover of Mayhem’s De Mysteriis album, Trondheim became a hotbed of activity in the-2000s. Created by the author of the underground fanzine Ancient Black Art, Nidrosian Black Metal pays tribute to the prolific yet secretive Norwegian black metal circle in Trondheim.

The book features a wealth of both black and white and colour photography, artwork, lyrics, flyers and documents relating to such stellar acts as:
MARE, KAOSRITUAL, ONE TAIL ONE HEAD, SLAGMAUR, CELESTIAL BLOODSHED, SELVHAT, WHOREDOM RIFE, APTORIAN DEMON and BLACK MAJESTY.

Compiled with the permission and cooperation of participants within the circle and the family of the late Steingrim Brissach (Celestial Bloodshed and many more).
Attention!!!
This is a pre-order. This one and all other items you’ll order now will not be shipped before September 31st 2022! 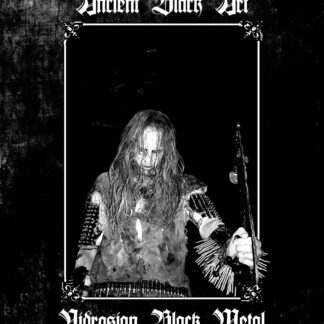