View cart “Bloodbath (SWE) – The Arrow Of Satan Is Drawn” has been added to your cart.

Originally released in 2005 as a one-time limited pressing, the Cythrául Klan vaults have reopened a second time with this “Rest Of” collection appropriately titled Mythological Occult Metal: 1991-2001.
This double-cassette anthology consists of rarities, EPs, covers, live and unreleased tracks, which were never featured on the five Osmose releases. Included are some discarded spells dating back to the band’s earliest songwriting efforts – one of which is their very first 7” EP: The Temples Of Offal.
This compilation documents all of Absu’s phases within the above-mentioned decade. Limited edition to 200 copies.

Black/Death Metal from the States 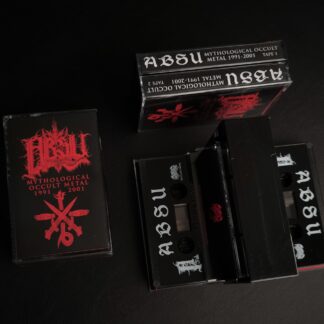